Skip to content
Posted on June 1, 2015May 18, 2015 Posted in Plastic is Not FantasticTagged environmental impact, Plastic, Plastic bagsLeave a comment

It’s been nearly a year since I submitted the “ban plastic bags in Auckland” petition to Mayor Len Brown and the Auckland Council. Since then there has been a flurry of activity, well, as much of a flurry that can happen in a large paper-weighted organisation like a Council. Nevertheless, progress has been made.

So, what does that mean?

What it means is that we are going to have meetings. Because meetings make things happen. The lovely people over at Auckland Council have established a ‘Packaging Workgroup’ – which is a rag-tag collection of retail, manufacturing, recycling, science (me), community and council representatives. We are going to work together to come up with solutions to reduce plastic bag use and work towards making Auckland plastic bag free.

BUT THERE’S MORE! Because the Council found that they have no mandate for a plastic bag ban at the regional level, the campaign has been kicked up a notch. Denise Roche from the Green Party New Zealand is travelling the country announcing the “Say NO to plastic bags” campaign. We are taking it the National Government, because we think that the environment is worth more than a 12 min-use-plastic bag.

The convenience, durability, and water resistance of the mighty plastic bag is a relatively recent addition to modern society. Plastic shopping bags were patented in 1965, but it took about a decade before they were ubiquitous globally. It wasn’t long before the handy shopping bag started to infiltrate the environment. Now, we churn out over 1 trillion plastic bags worldwide every year – that works out to be about 1 million plastic bags per minute! Where do they all go? well, about 2% get recycled, maybe. What about the other 98% of that 1 trillion?

“Marine litter is symptomatic of a wider malaise: namely the wasteful use and persistent poor management of natural resources…Some of the litter, like thin film single use plastic bags which choke marine life, should be banned or phased-out rapidly everywhere-there is simply zero justification for manufacturing them anymore, anywhere.”

I have a campaign to get the bag banned in Auckland, and hopefully one day New Zealand. Over the last few months I have been sporadically attending Auckland Council meetings and talking to people about banning single use plastic bags in Auckland. It has been a rather insightful experience into the dark world of politics and the human mind. It’s the kind of stuff that makes your skin crawl, and lose faith in humanity – enough to make you want to sit in a corner and weep. But then there are times when you are filled with hope, that real progress can actually happen, when you meet the few people that still hold onto compassion, and the integrity to make the world a better place. These people are worth their weight in gold…….But I digress……..This post is about dispelling some myths and clarifying some realities about what happens when a city makes the noble choice to ban single use plastic bags.

Frequently, I have conversations with people who can’t relinquish their love of the plastic bag, and they have some interesting reasons…. but here are a couple of the often used arguments for not banning plastic bags busted:

MYTH: Plastic Bags are not single use – they are reused, which eliminates their environmental impact.

I have had this conversation so many times….”But I use my supermarket shopping bags for bin liners, or to pick up my dog poo, so they’re not single use..” OK, so you use them twice.

The other conversation is along the lines of “….yeah, but…they recycle plastic bags, and I heard (from the mysterious “those people”) that recycling plants are short of plastic bags, so really we should be using more….”

REUSE: The average family brings home 1,200 plastic bags EVERY year. I am not great at mathematics but it seems unlikely they’re all reused, and definitely not more than twice (show me someone who uses the same bag to pick up dog poo more than twice and I’ll buy you a beer).

RECYCLING: This really irks me, mostly because it’s total bullshit, but more than that it’s a cop out – it’s the old “someone else will do it” argument. Shirking responsibility for your actions, and the consequences of those actions is easy if there is a fall-out guy, even if he/she is imaginary…….While designated plastic bag recycling facilities do exist, they are just not in NZ (and currently in Auckland there is no capacity to recycle plastic bags – locally or offshore). In the USA, the EPA estimates only 12 percent of bags are recycled. California estimates that the real number is even lower, about 2 percent, and then plastic bags aren’t truly recycled. Why….”Because plastic bags have a variety of dyes and other additives, it’s hard to know exactly what you’re getting if you melt down a bunch of bags that consumers have used,” (Mother Jones, 9/15/14). So, when bags are put in the recycling they can cause problems by clogging the machinery, causing equipment failures. If an entire load is contaminated with plastic bags, it will all go to landfill rather than be recycled. Also, I question where are all these recycling plants that will accept poo filled plastic bags, or the ones with the scraps from the Sunday roast inside…….

Some people I have talked to have said that it’s not the poor plastic bags fault that they end up in the environment (very anthropomorphic) but it’s people throwing plastic bags willy nilly out of their car windows and off their boats – if people just put them in the rubbish bins then there wouldn’t be a problem.

Just a wee reminder of the fact that we use 1 TRILLION bags a YEAR.

Plastic Grocery Bags Are 6th Most Prominent Trash Found On Coasts. Data from hundreds of thousands of International Coastal Cleanup volunteers for the Ocean Conservancy indicate that plastic bags are a major component of marine rubbish: 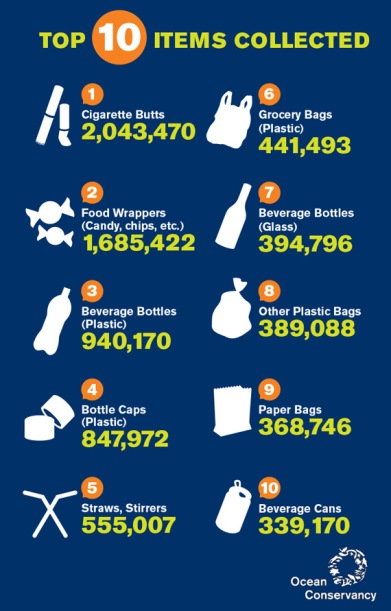 It is estimated that it takes from 500 to 1,000 years for a plastic bag to break down. Even then, they never fully biodegrade; they just break down into ever-tinier plastic pellets – called microplastics. Then they make their way into the food chain, we are still trying to understand the implications of this on people – US – the ones at the top of the food chain, so far things aren’t looking good……

The good news is that when bag bans are put in place, or even just taxes, things start to look a little brighter….

San Jose, California Found there was a major reduction in rubbish following the bag ban. A plastic bag ban in San Jose reduced bag litter in “approximately 89% in the storm drain system, 60% in the creeks and rivers, and 59% in City streets and neighborhoods,” according to a report from San Jose’s Transportation and Environment Committee (City of San Jose, 11/21/12)

MYTH: Ban will cause food-borne illnesses and DEATHS!

The National Review senior editor Ramesh Ponnuru wrote an opinion piece titled: “The Disgusting Consequences of Plastic-Bag Bans” claiming a study found that a ban on plastic bags in San Francisco led to 5.5 more deaths per year because of food poisoning (Bloomberg View, 2/4/13).

FACT: Studies fail to actually link deaths to bag bans, and there is always a little bit of COMMON SENSE – washing re-usable bags can prevent contamination

Interesting that this “Scientific study” that Ponnuru based his article on was conducted by lawyers* (*not experts in public or environmental health)….. The lawyers attributed the link between plastic bag bans and incidence of e-coli by looking at ER admissions. While they got some significant statistics from their analysis, there was no acknowledgement that it could be attributed to other factors, such as a number of contaminated processed meat products around the same time. Overall, the results are somewhat tenuous, even with my limited scientific experience and huge bias…..

And if you are worried about your chicken juices, just throw your re-usables through the washing machine. Easy Peasy.

MYTH: Bag bans harm the economy and cause people to lose jobs

The New Zealand packaging industry lead this argument, well, you can see why. The more packaging there is, the more profits they make. I’ll admit there are about 2,000 jobs in NZ manufacturing plastic bags, so yes, there will be job losses……but……

Studies have predicted economic benefits from bag bans: A study on two California cities bag bans determined that there has been “no sustained negative (economic) impact to retailers.” The study also reported that affected San Francisco retailers would see savings of $3 million/year under the strengthened ban by no longer having to pay for  single-use bags to give away to customers for free. (Public CEO, 2/20/14).

Finally, plastic bag bans save councils and states millions of dollars in clean up and disposal costs!

They may seem fairly harmless and very convenient, but plastic bags have a devastating impact on marine life. According to the 2007 Worldwatch report Oceans in Peril: Protecting Marine Biodiversity. At least 267 different species are known to have suffered from entanglement or ingestion of marine debris, and plastics and other synthetic materials cause the most problems for marine animals and birds. In 2010, a grey whale that was beached and died in Seattle was found to have more than 20 plastic bags in its stomach (Mother Jones, 9/15/14). Yuck. Further, plastic pollution costs $13 Billion US according the the United Nations Environment Program (UNEP). Bag Bans do MAKE A DIFFERENCE: China says that it has saved 4.8 million tons of oil since a ban on plastic bags was enforced. The rest of the world are starting to catch on – France is banning the bag by 2016, and Scotland is introducing a tax, joining an every increasing list of countries and cities getting on the bag-ban bandwagon.

We are fortunate to live in a place where we are not confronted by our waste on a moment by moment basis, many people are not…..Surely, the least we can do is stop using single use plastic bags.

I have a really big problem with something.

They’re everywhere, single use plastic bags for putting your already thrice packaged product in. The average time that a single plastic bag is used for is 12 minutes. I repeat 12 minutes.  As a seabird island ecologist, I get to see first hand the environmental impact of plastic pollution on wildlife. As a city dweller I see it everyday on my walks around my concrete jungle. The anger and frustration about these inanimate death chambers, which are completely unnecessary, continues to erode my heart.

The problem seems to be so mammoth, it’s difficult to know where to begin to try and stem the prolific usage. After hearing about the growing number of cities and countries around the world taking action to stem the flow of these plastic parasites into the environment, I decided to take action. Armchair action maybe, but I hear it can work, if done properly. So, here it is, my first foray into blogging, and petition making, all in the same week……..

Go on, give a girl a little support, and let’s ban plastic bags in Auckland……..

P.S. Here is a bit of MUSICAL inspiration for ya’ll  ……… http://www.youtube.com/watch?v=koETnR0NgLY 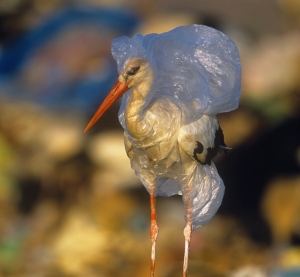